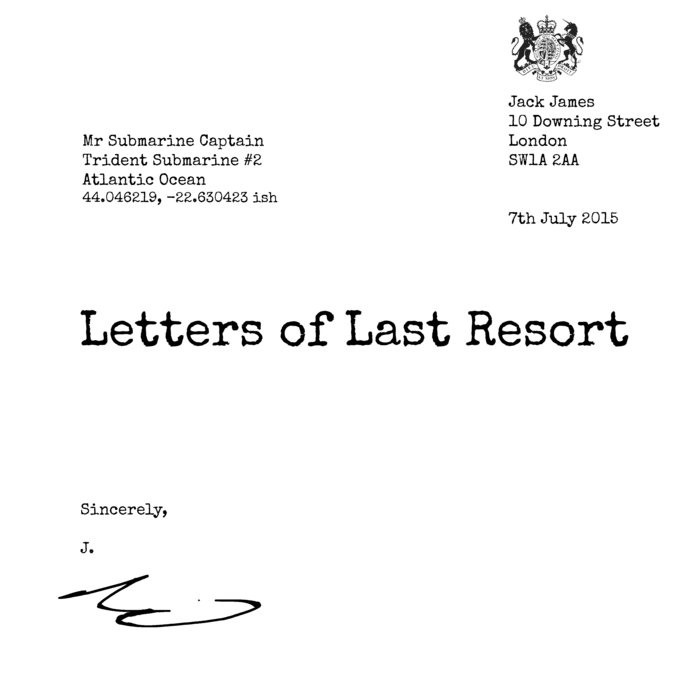 “From Neil Young... by way of Bonnie "Prince" Billy, to Arab Strap, without the charming vulgarity.” - The Herald

Being philosophical for a moment, we could interpret this quote as applying to humans in general, because let’s be real; we fear change. And this album is all change. The acoustic guitar is limited, there is no anatomical drawing and hey, is that a Hammond organ I hear? By logical induction we should fear this album because we're human. But change can be good, Barack Obama was elected based on this very notion.

So, this is Jack James' last resort. The titular letters being referenced are written by every incoming British Prime Minister since the 1950s. In the event that the UK is destroyed, they give standing orders to the British navy's nuclear submarine fleet. And current Jack James fans could take from this album that the artist they knew has been destroyed, so it is now up to them how they wish to react; love it, hate it or fire a thermonuclear weapon at it.

Call of the Void sets the scene, a natural indie-rock extension of previous albums, adding significant prominence to the electric guitar, bass and organ while maintaining the strong lyrical themes and structures. After Hours is a melody driven at nearly constant momentum, again retaining the familiar elements while filling out the instrumentals beyond the scope of any previous work. Phone Number is the catchiest song on the album, a prime example of the finely struck balance between the folk and rock elements, invoking other artists who successfully found that middle ground such as Elliott Smith, Cat Power or Plants and Animals.

So there it is; Jack James went electric, by which I mean there's a Telecaster and Hammond on the album. It's not a completely bizarre new direction, like launching a hip-hop alter-ego or something, but by the standards of a man who has released 5 albums of almost entirely folk music, it's a bold progressive step forward.