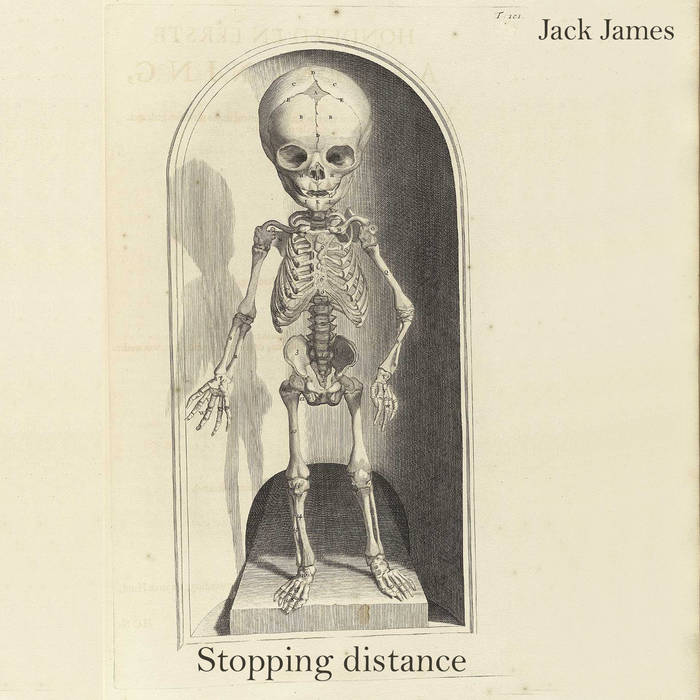 Jack James has a life threatening allergy to milk, to such an extent that he is forced to carry an Epinephrine autoinjector at all times. If he consumes any food that has been mixed with the alpha S1-casein protein, he will begin to die of anaphylactic shock. This happens more often than one may imagine and it's an interesting event, watching someone calmly avoid death by way of a small injection.

Okay, none of that is true at all, but it demonstrates a valid point; what do you actually know about the musicians you listen to? What do you want to know? It's not a one way conversation, so if you can connect to some lyric about acceptance, or even appreciate the historical autopsy drawing on the cover of "Stopping distance", then you have the chance to get to know Jack James a bit better.

As with the previous five albums this is a self-release that punches above its particular weight class when the songs are peeled back and analysed. Take "Florence" for example, probably the centrepiece of the album, which builds from a diminutive teasing melody before kicking into a rousing overture, all the while discussing a psychosomatic disorder also known as Stendhal syndrome. Another song like "Writer" is classic Jack James, an intimate wandering acoustic song about creative types trying to relate to the real world.

Here are some other relevant, factual things you may want to know before you decide to add this album to your collection. The recording studio used was the living room of a high-ceiled tenement flat in Glasgow's East End. All vocal and guitar takes were performed in a single live take, before adding various bells and whistles like banjos, pianos and drums. Going by the songs, Jack also has teeth, a tongue, appreciates art, is tired, and is fed up of arguing.

The most important thing you should take away from this release is that Jack James is a songwriter that isn't going away. There is probably more to learn, but you'll have to wait for another album to find out.

"This is 'Bonnie Prince Billy' good, and I cannae praise much higher than that" - scotswhayhae,com

"It’s almost as if he’s been writing songs backwards – starting with all the produced stuff and then sanding away until he got the core of the music" - dauphinmag,com

"The end result is a thoroughly dull and uninspiring album that exudes not so much despair – which I assume was the aim – as self indulgence" - bluesbunny,com